- Shantae and the pirate's curse (wiiU) 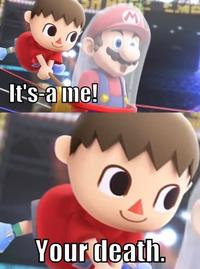 
"To paint in broad strokes, Melee is for the maniac, the veteran player, while Brawl is for a newer, more casual gamer, as far as the speed goes. Melee, of course, is super fast, and the people who are used to that game love that gameplay. But it may be a barrier for folks who found it a little imposing. Brawl was designed to be more approachable and accessible by folks who might [used to be playing] Wii Fit or Wii Play. Now, with the new Smash Bros., we're thinking the positioning will be really right in the middle.

The idea with Smash Bros., you have four players come together, and it's a fair playing field. The idea of having one person with this special controller and special features that are only available to the gamepad player flies in the face of that. Right now, we're not adding any additional [GamePad] functionality at all. With Smash Bros. being a four-player game we want people to be on equal footing. That's our main philosophy when it comes to control features.

There will be a single player [campaign], but it won't be like the [Subspace Emissary] mode in Brawl. One thing we can do with the Smash Bros. series that's unique to us — because we have all these different disparate characters brought together — is we can create that sort of fan-movie experience as a special gift. But now those things are posted on the internet, it doesn't really become a gift for people who played the game.

What we decided this time around, we're just going to have [those movies unlocked] from the beginning. We're going to have a movie for Wii Fit Trainer, The Villager and Mega Man and they'll be viewable right at the beginning, you can watch those right away.

At this point we have no plans for downloadable conten. Our goal is to have a Smash Bros. that has enough content, in terms of characters and stages, and that's where all our energies are focused. There's no fundamental opposition to downloadable content if it's something that felt like it worked. We haven't really decided whether we're going to do it or not. We're not opposed to it, we just need to work on completing the full package."

- Shantae and the pirate's curse (wiiU)

Community Forum Software by IP.Board
Concesso in licenza a: Wiitalia.it